The organisation promotes the art of storytelling and oral literature and facilitates the development of a network of professional German speaking storytellers across national borders. We run storytelling workshops and also organize the International Storytelling Festival "Zwischen Zeiten/In Between Times" taking place in Germany, Belgium and the Netherlands for the last 16 years. We further the collection of folk and regional tales. We initiate European school outreach programmes and support local storytelling activities dealing with the own immediate past influenced by war.

She is one of the pioneers of the german storytelling scene.

In 1996 she founded the „House of Fairy Tales and Stories". She loves stories and sees them as a bridge between people, cultures and other worlds. Her repertoire ranges from traditional narratives, literature of the fantastic to selfwritten stories and the mixture of all of them. From them evolve compositions to which musicians or artists add new sounds or enhance old pictures. She enchants "and adds beauty to it all" (a listener from Montreal, Canada).

She lived from 1980 until the end of 1989 in the United States of America: in the desert of Nevada, in Pittsbrugh Pa, in Washington D.C. and San Fransisco. There she gave literature courses in high schools and at the University, danced as a semi professional in several productions, took master classes with Tywla Tharp and Kai Tokai.

She worked with theater people and the independent film makers in Pittsburgh, took to the stage with 'Off –broadway' productions and developed theater pieces.

1983 she received her green card and since 1992 she lives in Germany as well as in the States.

1988 she met the first story tellers and was introduced and educated by them. 1992 the time of story telling as a performance art form began: story telling festivals in the US, in Denmark, the Netherlands, Belgium, Canada, Austria and Germany followed. She performs in schools, kindergardens, at libraries, senior citizen homes, castles, parks, prisons alone or with musicians, dancers or painters.

She created a program for the French Department of the University of Aachen RWTH :'King Arthur and the secret of his two swords'! She was asked by the Museum Villa Stuck in Munich to create a programm for the "Bundesgartenschau" and the opening of their new Museums building. A program about kid soldiers :'Heroes of our time' and one about the French sculptor Camille Claudel: 'The hands you took!' followed.

Her work with the musician Markus Stockhausen, Tara Bouman and Enrique Diaz as well as performances with the painter and sculptor Mary Bauermeister ( who worked with John Cage, and had shows at the Guggenheim, Whitney museum) brought new impulses to telling and improvisation.

1996 she opened the house of stories and tales. The goals: the acknowledgement of story telling as an art form, the establishment of a network of national and international story tellers ( the first meeting of German speaking professional story tellers took place in February 2008, 64 tellers from Austria, Switzerland and Germany cameto Aachen) and the development of inter culturel projects, inter generation projects.

Since 1997 she organizes every year the international story telling festival ' In-between-times / Zwischen-Zeiten', which was the first of its kind in Germany. ( www.maer.de ).

Since 1999 she develops and organizes European school projects which are located in Germany, Holland and Belgium.

1999 the Yehudi Menuhin foundation asked her to join in a special artist program in schools. For the last 10 years she is working for this foundation, which sends artists to primary schools in underdeveloped areas to work with a class for 2 years on a weekly basis. 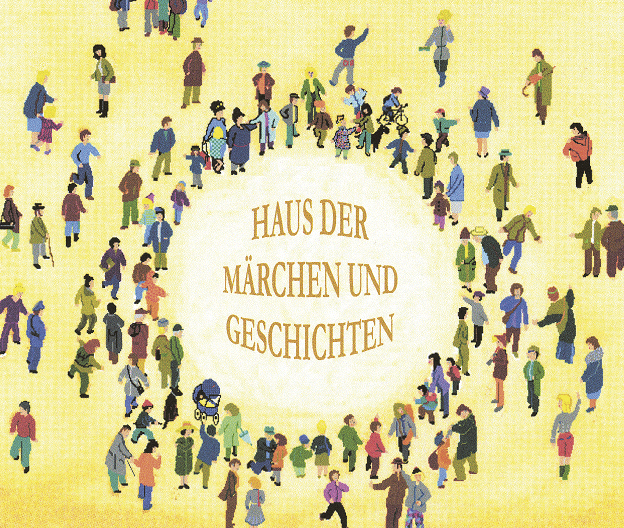 Seeing Stories is ending as a project. But through the project we have met many individuals and organisations who want to share good practice and creative skills. So we are forming an international network called Stories in Place. The network is open to all those who through their work, art or volunteering wish to strengthen the connections between people and place through storytelling. Our aim is to further strengthen international friendship and collaboration.

If you would like to be part of Stories in Place please contact Donald Smith, Project Manager of Seeing Stories, and Director of the Scottish International Storytelling Festival, on donald@scottishstorytellingcentre.com